In the last 6 weeks we have celebrated two birthdays. We used washable cups when at home, compostable plates when out, and were lucky enough to have a friend wanting to get rid of a couple hundred sports bottles so we could provide kids with reusable (if plastic) drinking bottles in the heat. Going home pressies were seed bombs and plant pots in paper bags, and no one felt (I hope!) like they missed out!
The issue of disposable table wear in particular is a huge one in the Jewish community (in fact there was an article about this in the Jewish Chronicle this week) and it's encouraging to see people beginning to take note; in fact at the Reform Movement conference last month we passed a motion that synagogues all undertake a review of their use of single use plastics and all work towards their removal. So lots of things to celebrate as we all continue to struggle against the habits we have allowed ourselves to fall into. 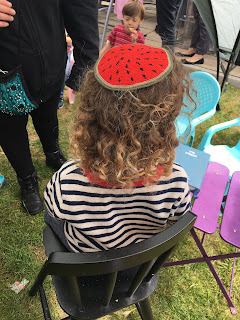 When we celebrated my sons 3rd birthday, as with his sister, he had his first hair cut. There is a Jewish tradition that we don't prune trees for their first 3 years so that their roots should grow strong, and this became a custom around children's hair cuts too. It is a ritual that allows us to acknowledge a shift in a child's development, and with increasing independence we as parents are forced to begin to let go of our baby, and acknowledge he/she is becoming a child with opinions (and oppositions!) As you can see we didn't do what many do and go for the full chop, but we tidied up the triangle shape at the bottom.
But this also marked a shift in my sons life in another way. He is now encouraged to wear his kippah - skull cap, and this has been a much bigger change than I expected. The weekend after his birthday we traveled up the M1 to a conference in the Midlands. At a service station well outside NW London, I was suddenly aware of my excited toddler running towards the Peppa Pig ride on toys, and the sideways looks his head was receiving. Am I putting my son in danger by encouraging a positive association with religious expression? Should he instead learn to hide his identity?
My husband has had similar experiences of quiet (and less quiet) judgments from others directed at him as a man wearing his Judaism publicly, but he is 6'2 and not someone most would choose to mess with. Am I putting my little blonde curly boy in danger? I am not sure I have an answer at this point, but I know I wish the world were not like this.
Email Post
Labels: anti-semitism Kippah parenting PlasticFree